After a year-long review, the Dutch government officially severed ties on Wednesday with one of six Palestinian civil society organizations that Israel controversially declared to be a terrorist group at the end of 2021.

The Netherlands will no longer fund the Union of Agricultural Working Committees, nor will it transfer the last installment of an already budgeted Dutch grant to the organization, two Dutch ministers wrote in a joint letter.

Israel said last October that the UAWC and five other nonprofits were terrorist groups for their alleged links to the Popular Front for the Liberation of Palestine. The declaration drew international condemnation; Israel doubled down, insisting that the evidence supporting the classification was “rock-solid”.

Israel accused the groups of deceiving European donors into providing them with millions of funds which they then transferred to the PFLP. The Dutch government review found no evidence that the UAWC did.

By registering, you accept the conditions

External investigators, however, found some overlap between members of the two organizations.

“There were links at the individual level between UAWC staff and board members and the PFLP for some time. Of particular concern is the large number of UAWC board members with roles in both organizations, ”the two Dutch ministers wrote.

External investigators hired by the Dutch government determined that the UAWC was likely unaware of the members’ political affiliation. But in their letter, Dutch diplomats said it was “reasonable to assume” that the organization was aware of the connections of PFLP board members.

The Netherlands had already suspended funding for the association in July 2020 after two UAWC employees were arrested by Israel for terrorism. The two employees, Abd al-Raziq Farraj and Samir Arbeed, were then charged with their alleged involvement in a 2019 roadside bombing that killed Israeli teenager Rina Shnerb.

The Dutch-led investigation determined that their funding helped pay the salaries of the two employees, although neither of them managed development projects supported by the Netherlands.

The Israeli Foreign Ministry hailed the Netherlands decision as an “important and commendable announcement”. He declined to comment on the failure of Dutch investigators to find evidence to support Israel’s other claims about the nonprofit.

“Israel will continue its dialogue with the Netherlands and other countries regarding these organizations, whose support constitutes a violation of Israeli law,” the foreign ministry said.

In a statement, the UAWC condemned the decision to end the funding, which it called “shocking and deeply disturbing.”

“We are shocked that the Dutch government has ended its funding of a major Palestinian civil society organization … on the basis of suspected individual ties,” the organization said, adding that the investigation contained factual inaccuracies.

Founded in 1986, the UAWC carries out agricultural projects on behalf of tens of thousands of Palestinian farmers. According to its director, some 25,000 Palestinian families benefit from the group’s work.

“We have no factional, religious or sectarian affiliations. We just don’t believe in those kinds of links. We are part of civil society, ”director Fuad Abu Seif told The Times of Israel in a previous interview. 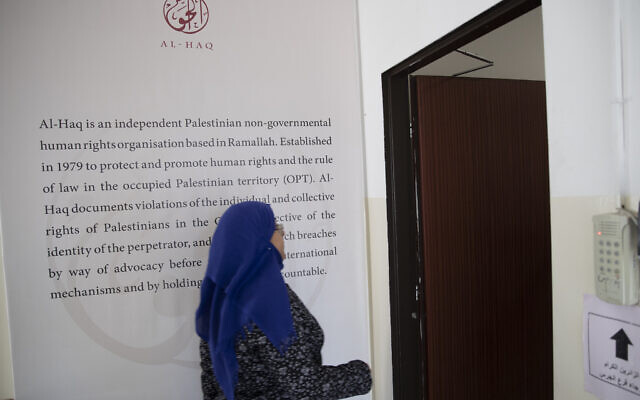 A Palestinian woman walks into the offices of the human rights organization al-Haq in Ramallah, West Bank on October 23, 2021 (AP Photo / Majdi Mohammed)

Abu Seif claimed that the alleged terrorist involvement of Farraj and Arbeed was not representative of the hundreds of people who work in the organization.

“We are talking about two people among hundreds of employees and thousands of families. What kind of ridiculous stupidity would we get with such an operation? Said Abu Seif.

Are you serious. We appreciate this!

We are really glad you read X Times of Israel Articles in the past month.

That’s why we come to work every day – to provide discerning readers like you with must-see coverage of Israel and the Jewish world.

So now we have a request. Unlike other media, we have not set up a paywall. But since the journalism we do is expensive, we invite readers for whom The Times of Israel has become important to help support our work by joining The Times of Israel community.

For as little as $ 6 per month, you can help support our quality journalism while benefiting from The Times of Israel WITHOUT ADVERTISING, as well as access to exclusive content reserved for members of the Times of Israel community.